I don’t have as much time as I’d like to read books. Otherwise, I would have finished Phil Ball’s Morbo in a day. Fortunately, I started doing a bit of cycling on the stationary bike, and so I was able to consume the history of Spanish football while getting a workout at the same time. 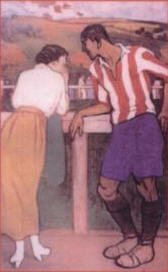 The word “morbo” refers to the antipathy between rival teams in Spain, as much a cultural phenomenon as a sporting one. That’s where the real story lies. In addition to interesting facts about the history of Spanish soccer, the book delves deep into the beliefs, languages, politics and interactions between various nations within Spain. Such regionalism is fascinating, as the unique segments of the country alternately clash and collaborate in a number of ways, perhaps none more so than in football

Ball seems to have a happy knack for starting up conversations with regular guys, all of whom have an opinion on the local side and how they reflect the superior character of the region’s inhabitants. The book is filled with nuggets of fun facts, such as Pope John Paul II being registered in Barcelona’s supporters club. Though the focus is the rivalry between Real Madrid and Barcelona, there’s still plenty of discussion about the teams from Galicia, Andalucia, and the Basque Country. The book’s got more flavor than paella, so check it out!

Thoughts on the 2020 Kentucky Derby